One of the most challenging aspects, when designing a new electronics product, is the AC-DC converter selection.

Why is that a challenge?

Many circuit designers are aware of all the problem, that can come with selecting the wrong AC-DC converters. As a consequence pre-built converter bricks become more and more popular. As an engineering company we have been facing this challenge multiple times in the past and struggle with it more often, than we want to admit.

How hard can it be?

In theory selecting a AC-DC converter is as easy as browsing to your favorite distributors webshop, entering the desired output voltage and current and ordering the module. In practice it is a little more difficult though.

We found ourselves in the situation of needing AC-DC converter with the following requirements:

A quick search at our main distributors left us with a two choices, that fit our requirements:

Where IT went wrong

When starting the design of the product, we had to decide whether we should use the Vigortronix, the Traco Power or look for a different supply. As we were unsure, we went with both. We planned to use the cheaper Vigortronix supply primarily and fall back to the reputable Traco Power converter.

The first thing, that we noticed is that, although the Vigortronix converter was in theory much cheaper, it required several external components. According to the datasheet, the converter requires an external X-class capacitor as well as a quite expensive common mode choke. This drove up the BOM cost significantly. There goes the cost advantage of the Vigortronix module.

With the prototypes ready and tested, we went to our EMI lab and had a really hard time.

The logical consequence was switching to the Traco prototype …  and conducted EM was fine.
The next test was the radiated emission … and we failed.

Then the test with our product continued with the Vigortronix and everything looked good.
During the last test, a 2kV voltage spike (surge) was applied between primary and secondary side of the powersupply … and it died.

The result of 1500€ worth of test time in the lab was bitter.
The Traco didn’t meet the radiated emission standards and the Vigortronix failed the surge test.

Back to the drawing board

After talking to the guys at the EMI lab, we were pointed to a Taiwanese manufacturing called MeanWell. 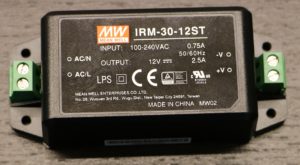 Learning from our previous mistakes, we did a clever thing and sent the AC-DC converter to the lab for pre-testing and received a promising report. Download report here (in German)

We built another prototype with the MeanWell supply and things started to look much better. Although we had to do some minor modifications, all tests we fine and we passed CE certification.

Why did we fail?

The major reason why we failed so horribly and spent several thousand euros for EMI testing was simple: We didn’t test our AC-DC converters prior to designing them in.

After this fail we decided to do better and more comprehensive testing of potential power supplies.
We invested in a lot of equipment and wrote some automated test code.

The results of this test are pretty comprehensive reports, that we will share, so that you don’t fall in the same traps as we did.