The iXion is designed to be a scalable high performance linux – based hardware and software platform.

The iXion is a mobile linux multimedia platform. It is based 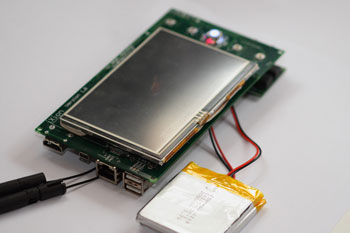 on a Gumstix Overo Fire Module. This Module features an TI OMAP3530 Application Processor, Wi-Fi and Bluetooth. The iXion platform itself features a 5 inch touchscreen along with an HDMI video output. The User Interaction Concept is based on this touchscreen, an RGB backlit Trackball and some buttons. For maximum connectivity the iXion provides two High-Speed USB-Ports and a USB OTG interface. As Wi-Fi isn’t always fast enough, in example for industrial usage, we also implemented standard Ethernet. For usage as a mobile platform we built a solid battery- and power management solution. The iXion also comes along with a 7.2 Mb/s 3G Module for mobile networking. To track the position of the iXion we also implemented GPS, a compass and a 3-axis accelerometer.